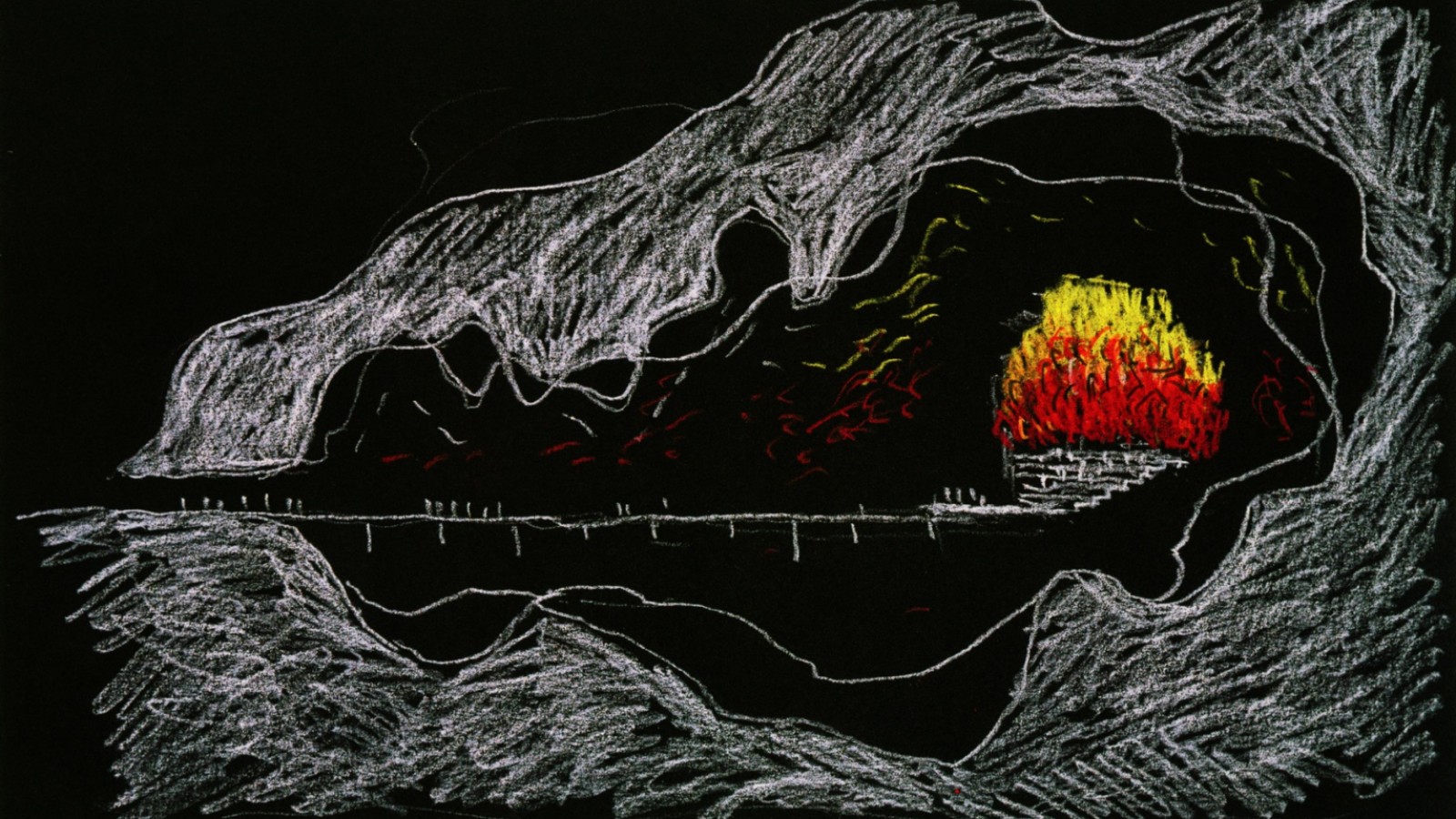 Read about the magnificent grotto in Lebanon, and how Jørn Utzon imagined a promising and endearing amphitheater in the belly of the beautiful grotto.

Five kilometres up the mountains behind the cliffs at Nahr el Kelb, one can find the grottos at Jeita, which are said to be among the most beautiful in the world. Though inhabited in prehistoric times, the caves were not discovered until 1836, when an American missionary, Reverend William Thomson, happen upon an underground stream – the source of Litani river – when taking cover from a sudden rainfall. The caves were mapped in stages, but it was not until an expedition in the 1950s that people realised that the Jeita Grottos were not only enormous but unique. In 1971, the travel writer Poul Carit Anderson described the Jeita Grottos as a “setting for Dante’s Hell, amorphous and incredibly sinister”.

The caves consist of two systems: a lower grotto, which is only accessible by boat, and the elevated dry chambers, later referred to as the upper galleries. In 1968, a 117-metre-long tunnel that was to be built in concrete was initiated, which would make it possible for the public to access the upper chambers – full of stalactites and stalagmites – by foot. The tunnel was followed by the installation of a series of walkways reaching 750 meters inside the grotto, permitting safe passage without disturbing the natural landscape shaped by the erosion of water and time.

Not sure where the grotto is located in Lebanon? Explore the Jeita Grotto on Google Maps.

An amphitheatre inside the grotto

In 1968, the same year as the tunnel was built, Jørn Utzon was asked to design a concert stage for its underworld.

According to Utzon, he strove to create the sense of a shelter without disrupting the actual cave, which entailed no use of any sort of roof or walls considering that this would destroy the complete sense of being inside the cave. He thus aimed for something delicate and light – a cage-like amphitheatre fixed delicately to the floor of the cave. This approach was, according to Utzon, based on a story from Danish folklore where a “Viking maiden was invited to the Viking chief’s court and told to come without cloth but not naked”. Much like the Viking Maiden, who had showed up at court wearing a fishing net that left her unclothed but not naked, Utzon developed a steel structure that would create a sense of space without completely isolating it from the cave’s acoustic environment.

Utzon’s design would be made from modules in equally sized steel segments, prefabricated in broad daylight and carried into the grotto one by one to be assembled on site. His design can be compared to a bird’s nest or a japanese paper lantern, which is “providing protection and a geometrical form to underline the amorphous form of the room”.

Utzon envisioned the contours of the structure to be “dotted with electric lights in red, orange, yellow and whitish grey”. The audience would enter the darkness of the cave by following a narrow footpath, urged forward by a hint of light looking like a dying fire enticing you in the distance. When the audience was seated, all the lights would be extinguished for a moment of total darkness, before the actors would then stand illuminated by a spotlight on the almost white, semi-circular stage floor.

After the performance, the cave would then be lit up entirely, so people on their way out could finally grasp the alien amorphous world, they had been surrounded by, before returning to ‘reality’. In this sense, Utzon’s design was conceived much like a primordial place of storytelling – imagine a prehistoric congregation around a bonfire in a place from before the beginning of time.

The project was discontinued in 1970 due to local conflicts, but it continues to be one of Utzon’s most exciting unbuilt projects.

Visit the Utzon Archives to see all of Utzon’s original drawings for the Jeita Grotto Theatre in Lebanon. In addition, it can be helpful to read more about Utzon's approach to architecture. 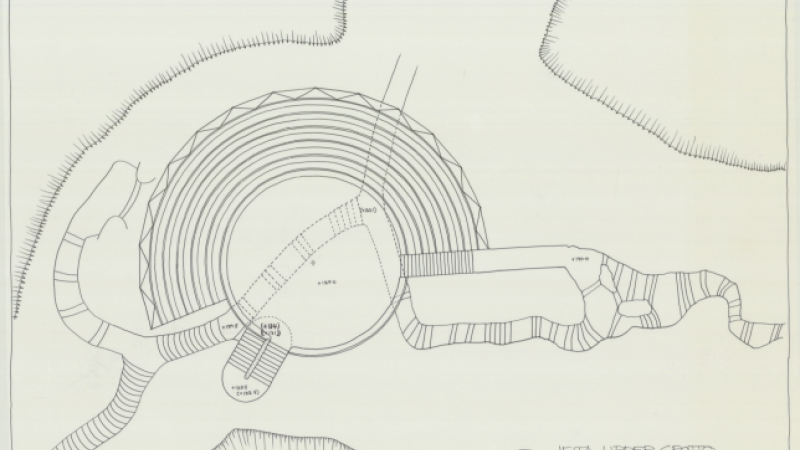 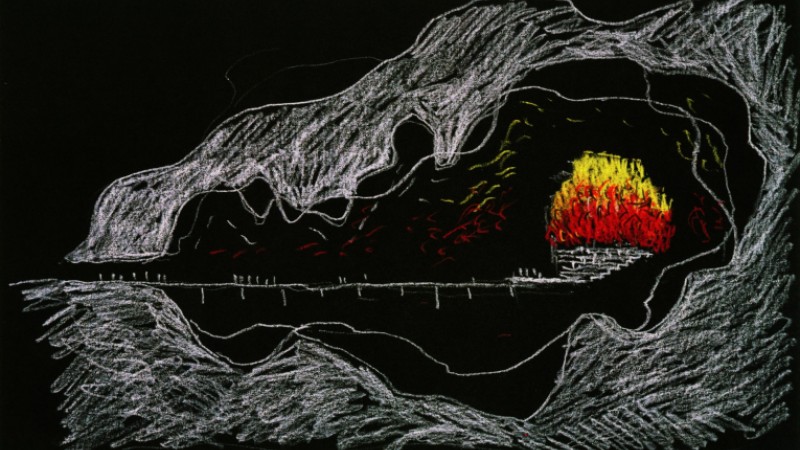 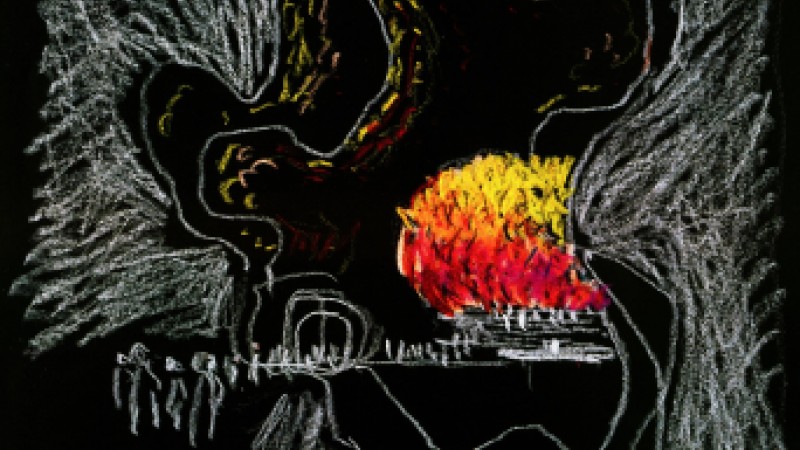 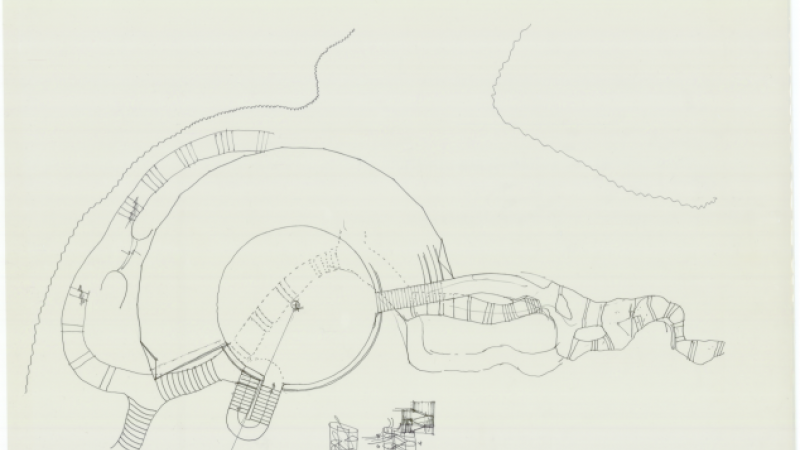